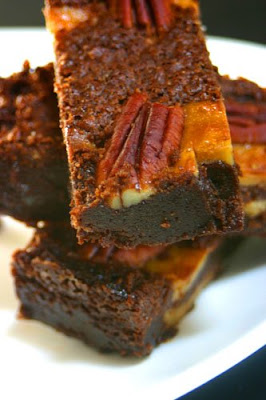 I hope you have time to spare for me and my chocolate?

Have you ever felt that since were grown up now life has lost its magic? That somehow our guardian angels (if ever you believe they exist) have left or abandoned us? This was the topic that I had with my youngest sister, those rare occasions that I see her online. A person of few words as we often describe her, but online she metamorphoses into a talkative person that is much approachable that is easier to communicate with.

As we were saying, how things could be so ironic that when we were kids our life was in reality was a harsher life. But we never perceived it that way. Life always finds solution to our small worries. We were craving for ice-cream and there we found that shiny coin that fell from whosever pocket to the ground. It was raining outside we couldn’t play we drew images of sun on the floor then the mighty sun appears and the rain suddenly stops. There was this time we needed to bring frogs for our science project and it rained so hard it flooded even inside our house. And you probably guessed what happened next. Dozens of frogs were swimming in our living room, catching them wasn’t so hard after all. Oh And that day that we all had that big exam on Math (the subject we hated the most) and that we prayed so hard to avoid it. Next thing we knew there was a big typhoon and classes we’re suspended. How I wish things right now were a lot easier like before.

I am happy that I had that chat with my sister yesterday. Honestly since our dad passed away (not so long ago) we never really confronted the void he left on us. We all tried to live a normal life and deliberately avoided this emptiness and sadness. I guess it’s just really hard to realize we are grown up persons now on our own. A grown up person that needs to maturely face the cruel realities of life

That is why eating chocolate a lot of time is highly advisable for it wakes up the childness on us. This is my entry to Lore’s Original Recipes.

And by the way I’m sending three slices of this brownies virtually to 3 Pinay bloggers that I want to cheer up: Kala (lost in translation somewhere in the Middle East), to Makis (giving tutorials without electric fan that’s cruel!) and to Haze (building her cement factory in Corsica). Go girls!! Put butter and chocolate in a saucepan over very low heat and stir until mixture becomes homegenous. Place eggs and sugar in a bowl and beat until mixture is pale and thick. Fold the chocolate mixture, sifted flour and pecan nuts. Mix well. Grease your square cake pan and pour the first layer with chocolate mixture. Add a layer of a dulche de leche on the layer and put the remaining chocolate mixture. See to it that the dulche de leche still floats on the surface. Decorate the surface with some pecan nuts. Bake in a preheated oven at 180° for about 20 to 30 minutes. I normally prepare my brownies a day before, keep them in the fridge and cut them once they have really cooled off. 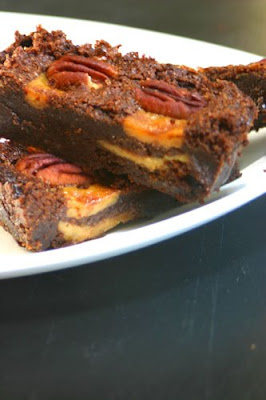 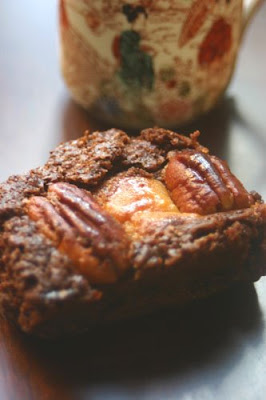 I've never had dulce de leche, but it looks delicious!

Hilda thank you and will do this as soon as I'm back in Marseille! Looks really tempting, and this will surely give moez energy to start doing my cement !

Thanks for the virtual brownie, Hilda, how did you know that I really need a big dose of chocolate right now? You definitely cheered me up. *hug*

Yes, I do believe they exist, Dhanggit, and sometimes they take the form of you and me, for other people, when we choose to be :) But miracles that allow us to skip important exams... That's another affair!

I LOVE chocolate and I love dulce de leche! This is just an explosion of love for me!

Ow, dulce de leche is yummy.. there's so much of it here in Miami as dulce de leche is a huge hispanic thing. anyway, your blog made me miss my mother. she also passed away not even a year ago, and definitely, there's a void there. but i believe that our angels never leave us. we are the ones who leave them sometimes, by doing things that are not right in God's sight. I agree with Manggy.. God uses people to bless us sometimes; that's how they become "angels" to us.. good post! and props to the 3 pinays you've mentioned.

Fridays are becoming my favorite blogging day because of your chocolate and sugar fix. Every week you turn out yet another awesome chocolate awesome treat. Dulche de leche? I'm am sooooooooo there.

Marriage? Tell ya what... with those brownies you have both my heart AND my stomach... haha

Thank you for sharing.

Chocolate, caramel and pecans are individually very good, but together - mind blowing!

Dhanggit there are some things i've never had the pleasure of tastng ...yet! and dulce de leche is one of them. and this brownie is a good way for me to try it!!! yum!! this looks awesome!!

Dhanggit there are some things i've never had the pleasure of tastng ...yet! and dulce de leche is one of them. and this brownie is a good way for me to try it!!! yum!! this looks awesome!!

Words fail me. This is wicked!

I love you! You make me drool!
I make sure I eat a bit of chocolate everyday..maybe that is why I am still a dorky kid at heart! But hmmm..the chocolate doesnt make the bills go away..damn it..I guess it isnt a cure all!!!

I was planning to make a batch of dulce de leche this weekend. Usually my husband eats it right from the jar, but if I can save some, I'll definitely try these brownies. Delicious!

You must be happy to have someone like your sister to share the good and the bad in life for such a long time.

Chocolate AND dulce de leche? That sounds so decandent! Love the pecans on top.
Thanks for sending it my way :)

oh this is making me swoon - choc, ddl and pecans can it get any better oh yeah - it's a brownie!

Hilda!!!! Thanks so much for this virtual brownie! Sympre na-touch naman ako sayo ati. Maraming salamat!

Those brownies look amazing! I love brownies, and I also love pecans and dulce de leche.

I'm so glad you had a chat with your sis. Hope everything works out.

This must have been too good to be true. Never thought of adding dulce de leche to brownies. Maybe that's because I usually eat it by the spoon ;)

Ha! I also am the girl of few words in my family. My blog is kind of an outlet to let myself out a bit. It is nice your sister has you to share things with, and how kind of you to listen. I wish I had a sister.
Anything with dulce de leche is fantastic in my opinion. Gorgeous photos as well!

Dhanggit,
I am touched! Your story is similar to mine, though I didn't have frogs come into the house when my parents house was flooded! I cherish those memories and am so bless that my sisters and brothers are so close to each other!

Dark chocolate would always always be our favorite!
Nice recipe you have there! Cheers.

Thank you for sharing your memories, and I'm so sorry about your dad.

Oh my!! I knew you were a girl after my own heart!! I swear these are the brownies of my dreams! Gorgeous!

Those look so good! I have been wanting to try dulce de leche.

Wonderful and the ultimate comfort dessert.

Fabulous fabulous...& yummy all the way. Love all that that went into these brownies!

Simply amazing! I have run out of words now, seriously :) Is there a reason for using the self rising flour and is there a substitute for it?

just discovered your site from Anh's...so glad we did! This looks so awesome!

hi there! i was so convinced with all the praises and good comments so i decided to try the recipe. while i was in the middle of it, i saw that you missed out the procedure on what to do with the egg and sugar mixture. i just decided to mix the chocolate-butter mixture to the egg and sugar but was a bit hesitant since the chocolate and butter is warm. but good thing it didnt cooked the eggs.

next is, what pan did you use anyway? since i used the smallest one which made my brownies thick and it takes longer than your given time to cook :(