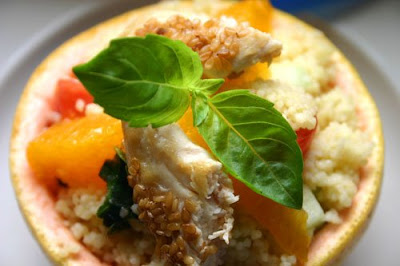 My power pack high in Vitamin C,
California Citrus Couscous Salad
My husband and I, are a real team.

I love cooking, he loves eating. He looses things, I find them. He buys things in the kitchen, I break them (these are accidental of course). He loves to complain (he is French, I insist on that) while I love giving compliments to compensate :-). He is so good in numbers, good thing he is around to help me out. Like any other couple, I do the talking and he does the listening. And when things go wrong, he fumes with madness while I cast it out with laughter.

Men and women are really different but that's what completes us together isn't it?

Anyways, since yesterday was a French national holiday and with a beautiful sunny weather that we had, we could only think of driving to the aqua blue beach of Calanque and spend the afternoon there. As we often go to the same beach most of the time, we opted to try the other part of it we least explore. So normal driving routine scenario in our couple: he's behind the wheels and I am the co-pilot holding the map, giving the directions. After hours of driving (we should have arrived decades ago) I confessed that I mis-read the map and we were lost. I don't know why map is so unfathomable for me. He was about to get angry but then we saw this amazing field of coquelicot, beautiful and inviting. I told him, it was a detour so we could take a photograph. He smiled with my alibi. He pulled over, and we went out . Me, hubby and our 8 months old baby girl all together we savour the beauty of nature for a while.

As I prepare this fruity couscous salad in the kitchen, I thought that getting a GPS may not be that bad afterall. 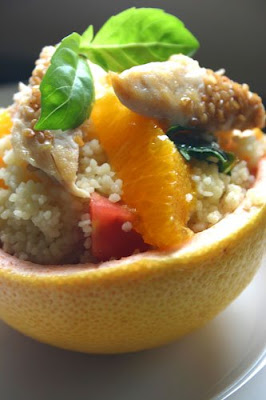 In a small pot bring chicken broth and 1/4 cup water to a boil. Add couscous, cover, and remove from heat. And let it stand for about 5 minutes. Fluff it with your hands. In a small pan, fry the chicken breast crusted with sesame seeds in 3 tbsps of olive oil until golden brown on both sides and set aside. In a small bowl, mix together the remaining olive oil, lemon, salt and pepper. Pour over couscous and toss. Stir in the red pepper, onions, cucumber, oranges and pomelos in the salad. Slice thinly the chicken breast and top it on the couscous. Chop the mint and basil sprigs. 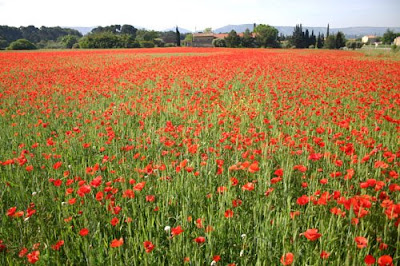 The captivating field of coquelicot 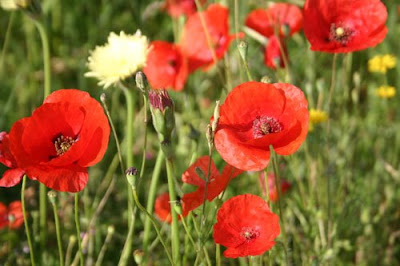 If you love Kenzo, you know what is coquelicot 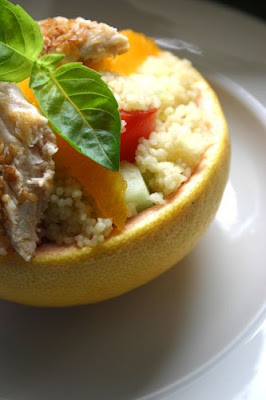 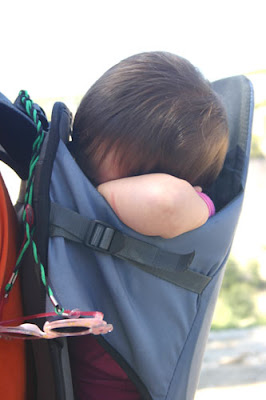 Happy Mother's Day, what a lovely post and beautiful photos!

I love Kenzo, crazy about one of the products actually (Parfum D'Ete). :) Happy Mother's Day Dhanggit!

Definitely Maybe!
Not Just Another Blog..

My daughter wears Kenzo. And your field of poppies reminded me very much of my native California, where they grow wild and are protected.

HAPPY MOTHER'S DAY to you dear girl. Your angel is adoreable!! Love the post, the colours & the fields of flowers. We call these poppies here, & they are one of my fave flowers! Was here to get the toblerone hearts recipe to post them for Mother's Day...my hub & me make quite the same team, only difference us that I complain & he doesn't!!! LOL Dhanggit!

This salad is exactly what I was looking for!

I have been looking for the perfect recipe to use up all my couscous...thank you, it looks divine!

what a wonderful couscous, i'm sure the flavor is so light and yummy! and happy mother's day to you!

ps: that is 1 yummy-looking healthy salad!

Happy Mother's Dya! Hope you enjoy and have fun:))

First of all , happy mothers day Dhanggit, your baby is growing up fast !!!!
I agree , couples must complain each other-
Like always your dish is stunning , citrus couscous salad, sound delicious and an amazing idea

What a lovely and delicious salad, and the field of poppies too.

My son gave me a small GPS thingie last Christmas because my daughter and I get lost whenever we go to Washington D.C. by ourselves. We forgot to bring it the last time we went and got lost AGAIN!:)

A lovely couscous indeed! Love your presentation as always. :D