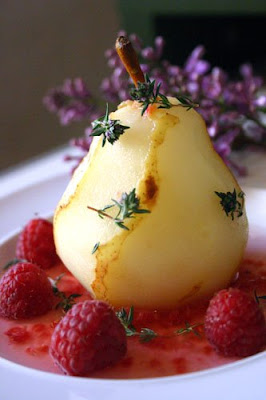 After few weeks of absence I'm finally back in my kitchen.
It feels so good to be back here in my comfort zone but I would admit that my magic wand still stays a bit rustic having been unused for a moment. As I was inspecting the beautiful wild thymes I gathered with my husband yesterday in the nearby forest during our short promenade I could'nt get out of my head what happened during the first day I arrived in Philippines for my dad's wake. 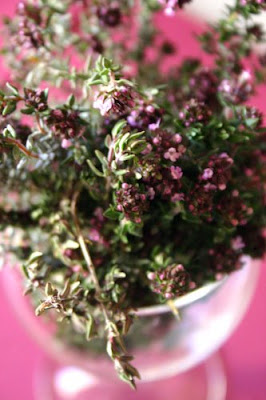 To begin with, I was baptised and raised catholic and I have always believed in God. I used to be scared of ghosts when I was a young girl but I start disbelieving its existence as I grew up. So I keep asking myself on how do I explain the X-file like (?) story that I had few weeks ago. The day I arrived on my parent's house was already the second day of my dad's wake. That night all my friends from childhood and acquintances who knew my dad poured in. It was more like a high school reunion ambiance than a wake. Eventually my sister's friend that everybody's claiming to be a "medium" showed up. She knew my dad too and it was only natural for her to pay a visit. At around 5 in the morning, according to my sister she saw her friend's face suddenly lighted up and smiled discretely at the corner of the house. Curious of what was happening, she asked her if my dad was there and she nodded her head. When my sister narrated me this I was skeptical and I told her I'm wondering if my dad was aware that I am already back in Philippines. Having said that I heard a voice who uttered my name and abruptly I felt goosebumps everywhere. My sister didn't hear the voice but I swear I had a very strong emotions at that instant that my dad was actually with us. I won't blame you if you don't believe me because it is equally hard for me to understand what really happened.

I know that my poached pear in wild thyme and raspberry recipe doesn't sound too spooky and could be unfit for my uncanny post. But I tell you it's worth trying. 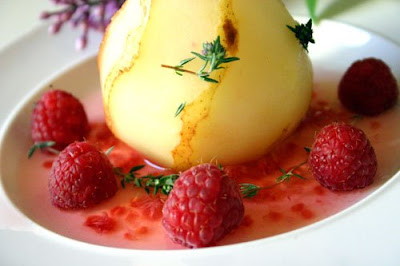 Wash and peel the pears leaving the stems intact. Mix the sugar and water in a casserole and cook slowly over medium fire. Stir the syrup non stop until the liquid boils. Let the thyme and half of the raspberries infused in the syrup for an hour out of fire. Using a fork crush the thyme and raspberries in the casserole and strain the liquid. Put back the liquid in the casserole and cook the pears at a medium heat for about twenty to thirty minutes. Remove the pears delicately and let them stand in a plate. Reduce the liquid to half until it thickens a bit. Dress the plate with a pear in the middle and fresh raspberries around. You may add up some fresh thymes on the pear. Pour over the sauce. 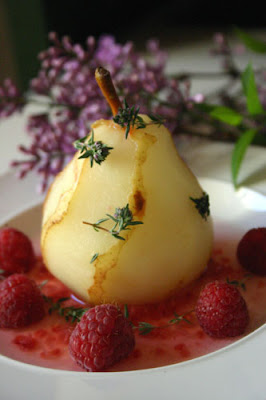 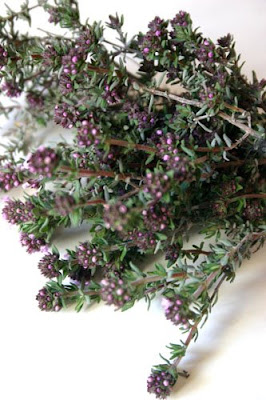 Email ThisBlogThis!Share to TwitterShare to FacebookShare to Pinterest
Labels: Poached pears in wild thymes and raspberries

Dear Dhanggit, I am so happy to have read your comment on my post as I know you are stronger and far better! babe great to see your kitchen is on now, those pears are awesome! sunny & sidney

So, so very glad you're sharing your beautiful food with us again! Your pears look scrumptious!

That's a beautiful-looking dessert! Glad to have you back in action, Dhanggit.

Im sooooo happy you come back again!! welcome dear. These pears are the most beautiful I seen!! Looks amazinG! xxGloria

Ah, that makes you, me, and Marvin who have recently poached pears, haha :) Even if you claim to be a bit rusty, your work is still as beautiful as ever. I especially love the creative way you peeled the pear! And how could I resist those raspberries?

I too am Catholic and I firmly don't believe in ghosts-- you know, physical manifestations of spirits, frightening us, etc. But I do believe that the power and strength of love overcomes death, and time and space. Your dad will always be in your heart and mind, and he does not have to move candlesticks or such to prove that he'll be at your side, guiding your way :) Take care, Dhanggit.

I'm sure your father is there watching over you!

This dessert is so elegant and beautiful!

I was raised Catholic but am open to many things. I believe what occured as I have has similar experinces. Our loved ones may be gone from the earth but their presence lives on . Sometime I look at a relative , a friend,or myself and see my mother staring back, because she's in us.

I am sure your Papush is delighted to see you back in circulation. He may not be physically present but he lives in your heart!

I only make pears with chocolate and nuts but this one is quite original with thyme, didn't know it's possible. I just use thyme usually on meat and fish !

Being a Catholic I shouldn't believe in reincarnation and ghosts, but I do.

I think I'll poach some pears after reading this beautiful poached pears and Marvin's.:)

I love poached pears! Welcome back dhanggit. When a family member passes, my mom ALWAYS sees or feels something metaphysical.

Welcome back home- *hugs* I believe that it's always possible to hear the voice or comfort of a lost one. After my uncle die I would dream of him Healthy again and happy.

A gorgeous dessert and stunning photos.

Your story gave me goosebumps! Wow.

And the pears are gorgeous. I love thyme and am so jealous that you can gather it wild.

It warms my heart to see that you're back in the kitchen, Dhanggit. Thank you for a beautiful post and equally beautiful recipe. When you get a minute, there is an award for you on my blog. Best, Susan

That must be the most beautiful desert I have ever seen, I love the little bit of peel you left...so cool.

this recipe sounds and looks fabulous. i featured it on my blog yesterday morning...hope you check it out: http://pennappetit.blogspot.com/2008/05/friday-blog-lovin-poached-pears-in-wild.html

Glad you are back Dhanggit! The dessert is so beautiful-it looks like a piece of art.

I believe your story! I really do. I don't think it's spooky.

it doesn't only look nice, dhanggit, it must also taste as good as it looks! ^_^ i hope you're truly better now.

Hey Dhanggit, welcome back & good to see you so strong & back to what you enjoy! Take care girl...

I think it is wonderful that your dad was there :) Take care!

Yes, these are so very pretty and delicious! Welcome back and it feels to great to see, smell and read your blog! You are loved!

When my grandfather passed away I had a similar experience. I believe that maybe is something about our love for our beloved relatives... I don't know , is hard to explain, but makes me stay peaceful with myself and conforting
Nice to see you again posting and see your amazing recipes and beautiful photos

Shows the closeness you shared with your dad...

Nice to have you back!

And you have such beautiful colors here.

I have just stumbled upon your blog. I love the clean design and fantastic photos. I am a blogger myself and always thought that design was key and you have certainly captured that! There are so many food blogs out there these days and being different to all the others is key. I have just started www.ifoods.tv which is a website for chefs, foodies and food bloggers to hand out, share recipes, photos and videos. When i was blogging I always thought i should be getting more traffic as my blog was getting lost in the masses of stuff out there so my new site is aimed at giving food bloggers and chefs a bigger platform! Hope you enjoy it and keep up the good writing and design here! I have now bookmarked you so will be regular reader, Cheers!

Dear Dhanggit, so nice to see you around! Take one step at a time, you'll find new meanings for your magic wand. :-) Lovely poached pears with wild thyme. I'm not sure about Agent Molder but I would love it!

so sorry to hear about your dear dad's demise, dear dhanggit.

after my mom passed away, i had similar experiences like yours.

Dear Dhanggit, yoohuuu!!! where are you??? I have an Award to you in my Blog.xxGloria

Hamlet said it best, Dhanggit: "There are more things in heaven and earth, Horatio, Than are dreamt of in your philosophy."

I am so glad you are back, dear girl. What a lovely day, spending it collecting thyme. Beautiful recipe! It suits you. : }

Hi Dhanggit! So happy to see you back in the kitchen...and with such a beautiful dessert as that :)

I don't want to believe in ghosts...but that doesn't mean I don't get tingly/goosebumpy feelings! I do like what Manggy said though - "the power and strength of love overcomes death, and time and space" - very well said!

Welcome back! Missed you.

If you felt something, I think it must have been your dad. Who knows what really happens in the afterlife?

I like the vibrate color and presentable of your pear.Look so elegant.

Bigboysoven, the pleasure is mine too! i'm glad to be back too :-)

Ann and Jack, thanks to both of you!!

Manggy, hahaha its true!! i saw yours and Marvin's poached pear recipes!!it should have ben a fiesta of pears!

Glamah, its true to imagine these types of experiences :-)

Oggi, its true its hard to explain why we believe in those things even if we are catholic at the same time :-)

James, thanks to you!!

Susanfoodblogga, Im glad to be back too!!

Nina, thanks for the compliment

Emiline, thanks and im glad to be back!

K&S, i agree with you, it feels so warm that he was indeed there!!

White on rice couple, thanks guys!

Tigerfish, im glad to be back too

Privatecef, im deeply touched by your words thanks!

Gloria, oh really i cant wait to have it!!

Susan, my kisses to you my friend!!

Chichajo, i agree with you and manggy!!

Wandering chopsticks, thanks me too!!

I've just been learning how good thyme is in combination with sweet things... This just confirms it once again. I must try!

The day my aunt died I was celebrating my birthday and I started crying and I could only say my cousin's nae. I did not know she had died, I just knew something was terribly wrong. The night my brotehr died, I dreamt that this huge shadows was flying through my room trying to trap me and I woke up screaming his name. Why am I telling you this? Because I totally understand how you feel. I like to think that when the wind touches my face that they are whispering to me. Hang in there :)
The pears are wonderful!