Matcha Mint Cupcake: I "mint" it, this is how it happened! 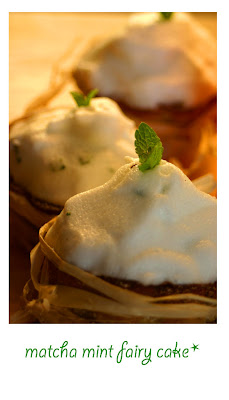 Thirty years ago (and +) on this very day when Philippines was still under a dictatorship, a woman who was on her 9th month pregnancy panicked when her water bag broke at 12 midnight. For it was only a couple of months ago when Marshall Law was enforced and curfew hour was set among citizens. Anyone caught defying this law will surely be put in jail. His husband although aware of this, didn't had any second thought in carrying her wife and off they go. The entire street was totally dark and empty. He was standing there desperately with her wife when all of a sudden there was a jeepney coming towards them. The driver was on his way home trying to beat the fixed curfew hour too but could not resist at the sight of a pregnant woman suffering. He proposed to drive them to the nearest hospital (around 30 kilometers away). That very same night I had my three heroes: my mom for her courage, my dad for being there and that "jeepney driver". Yup, today is my birthday!
Nothing beats a good cupcake on special day like this. And so, here is my entry for the Cupcake Hero's December edition that demands for mint as an ingredient: Matcha & Mint Fairy Cake with Red Fruits and Royal Icing . 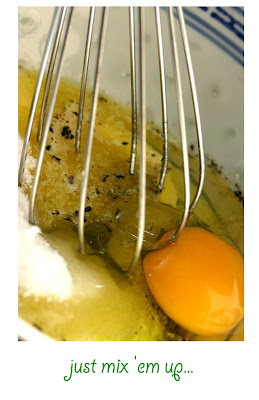 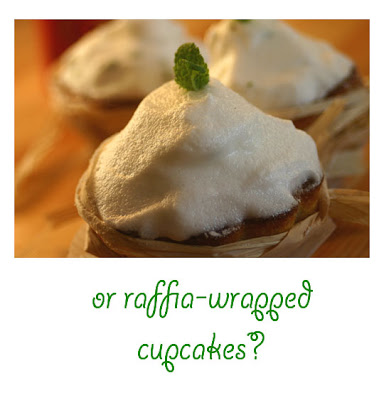 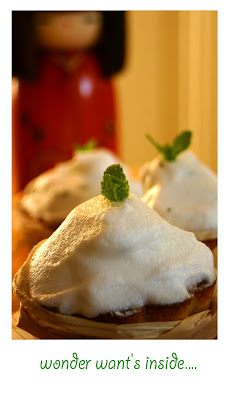 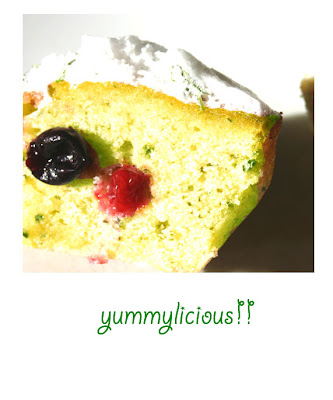 In an electric blender mix up the green tea, the mint leaves and the dried citrus peel. In a bowl mixed up all the ingredients and bake in cupcake papers for 20 minutes at 180 degrees. The top it up with royal icing frosting.

This is killing me! I love the typestyle used too :-) Aside from cake one of my other favorite things is typography!

Gorgeous cakes and even more amazing story! Oh my gosh, I was scared for you!

Happy Birthday to you sweetie !!!!
Gorgeous cake with a perfect name, lovely story and after this adventure I presume you are a brave girl.
Hugs

Looks great, Dhanggit!
By the way, 30 kilometers from the nearest hospital is quite far! Where in the world did your parents live back here? :)

Happy Birthday Dear Dhanggit!
From your clues, i now know you are a 'baby' :-) I was born a year before Martial Law was declared :-)

Your cupcake sounds intriguing. Lovely flavours and I love the surprise in the middle. Enjoy your special day.

martial law na ulit ngayon, undeclared as it may be ",)

we had a 12mn-5am curfew last week,
and maybe, a future blogger with a similar story was born too,
and we'll hear his/her story in 2037!

HAPPY BIRTHDAY to you.
Wow your dad is a real hero your mom too.
Love the cake

Oh, they're so pretty! It's the perfect time of year for mint.

Happy birthday!!! You have an intersting birthday story. That's crazy that there was a curfew back then.

Happy birthday! These look and sound amazing!! I really like the sound of the mactha and mint combo.

A very hsappy belated birthday! May your year be filled with wonderful surprises and many moments of uncontrollable laughter!
Beautiful cupcakes to celebrate this special day!
ronell

Happy birthday Dhanggit! Those cupcakes look divine. Did you put a candle in one to blow while you make your wish? Hope your dreams come true.

What a great cupcake creation! I've never thought of adding mint leaves to baked goods so thanks for that idea. :)

This is good for the upcoming Christmas season ! Hey where are you going to spend the holidays, btw ? I'm back but still need to re-organize at home !

yumn! I love matcha anything!

im deeply touch...thanks for all your greeting

Happy birthday from me too!!!

Stunning cupcakes you have such a great talent :)

Babe your cupcake realy look so exciting. why? So oriental and full of inside treasure! I love it!

Happy belated birthday, Dhanngit! Sorry I missed it. Heck, I might miss my own next week, what with all the holiday prep! : )

happy birthday girl sorry a bit late been too busy wiht work
ah so are of the same martial law generation (i was born just less than two years...

Happy belated birthday! I hope it was a great one! Your cupcakes look wonderful.

You're proving me right. Matcha is all over the place! But these look especially fantastic, nice job.

Looks good. I might add a little more matcha myself to really give it that green color.