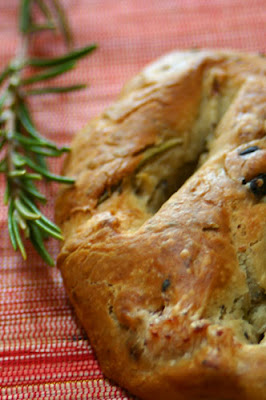 Last Saturday night I received a phone call from my mom-in law requesting me to come over to their place to help her organize the upcoming Christmas family gathering. Contrary to most norm, my mom-in law and I blend well together. I would say all my french and provençal cuisine inpirations I owe it to her. She hails from a family gourmet, that have secret recipes handed down from generations to generations. Her mom or "Mamie" as we often call her have killer recipes for all the fabulous traditional french desserts and pattisseries. Chez Mamie everything is "fait à la maison". For someone who is passionate in cooking and an amateur gourmet like me, I'm truly lucky to be surrounded by talented people like them. Well, we have finally decided where to organize the two-day celebration. Since there will be fifty guests (adults and children) we scratched the original plan of doing it in family's chalet in the Alpes because it's impossible we fit all together. We decided to do it instead in the family's ancestral farmhouse in the heart of Provence, that has been fully restored and converted into a Hostel. It is a beautiful 4 story house that dates back Middle ages that "gossip says" was owned by the friend of the royalty. The scenery is much impressive during the summer because it is surrounded by an immense plantation of lavander, sunflower and grapes. After hours of discussions we have finally agreed on the menu, what wines and champagne to serve and the desserts that needs to be prepared. 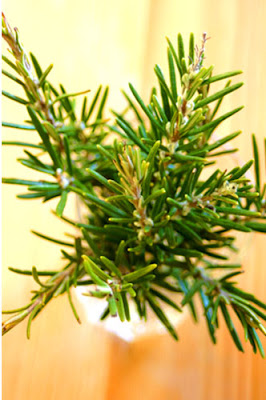 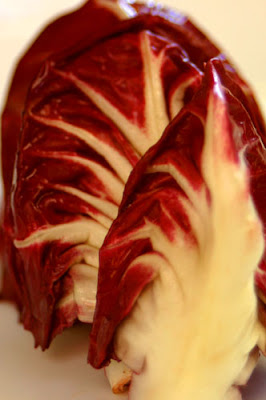 Bloody red Raddichio
After this tedious discussions on "what to eat and how to serve them" (hey don't you think we are really gourmet) I volunteered to prepare a "brunch" for everybody. I was excited because she has a bigger kitchen and she has a garden full of fruits and herbes that I could use for the menu I planned to prepare. 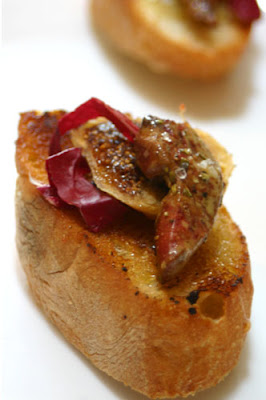 Beat the butter together with honey. Spread over this mixture over sliced bread and grill until brown. Brown over a skillet pan the chicken liver with olive oil and herbes de provence. Top each toasted bread with raddicio, sliced fig and chicken liver. 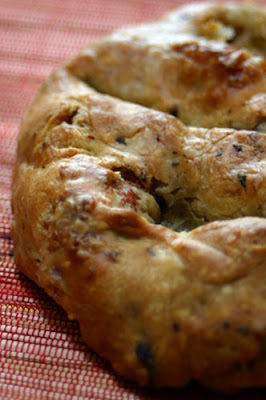 Fougasse is a typical Provençal bread eaten with a hearty salad. It is similar to Italian focaccia.

The night before, prepare the dough. In a bowl mix the flour with salt and add little by little the water. Dissolve the yeast in about 2 tbsps of warm water. Add this diluted yeast on the flour mixture and work on the dough until it becomes elastic. Cover with a humid towel and let the dough rise. After the first rise, you can add some olive oil and work again on the dough. The next day add the rest of the ingredients and form a big ball and flatten it with you palm. Cut 4 incisions on the dough as if its an ear of a wheat. Bake it for 10 minutes at 220° on a pre-heated oven. 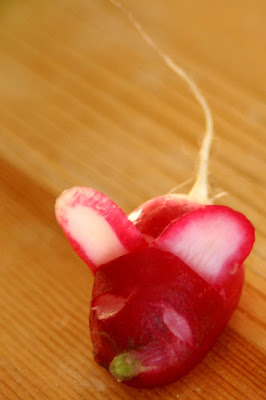 Oh there's a mouse in the kitchen!

The fougasse is looking so delicious. I think it will be great with soup too...are there any variations on bacon and olive? Maybe onions?

Thanks for dropping by to my blog. What a great blog you have here. Beautiful food and beautiful pictures you took. I have a lot to learn from you :)Do you mind if I link you?

Wow 50 ppl for christmas dinner it sounds so lovely. Sure there is going to be lot of fun and laughter

Could this be any more appealing-looking?! Also, can we turn back the clock and I get an invite to brunch? :-)

Oh Gosh, this is an great recipe, lovely. I like the way the liver is being done. What more to say ..... lovely!

Your fougasse looks so delicious and such a wonderful recipe! Great pics too :)

Hi,
Thanks for leaving me a note. Your Fougasse looks so good and the radish mouse is sooooo cute!

Delicious, and what a cute little mouse!!

Hey, thanks for visiting my blog! Sounds like you're going to have a feast at your Christmas family gathering!

I wish those were the only type of mice that ever grace my kitchen!

beautiful blog u have here and I love the idea of the pate and burschetta. It looks lovely!

I love rosemary but only get to try it in restaurants. My family cooks traditional Filipino food most of the time and if we eat out, it's always Chinese.

my goodness, can't keep count of the favourite things i have in this menu- chicken livers, figs, raddichio (my fave salad leaf), crusty bread. love this. would you come over and prepare this for us please? haven't had much chance to cook/blog lately as the kids and i have been sick:-(

Where did you get the figs? I can get them fresh only in August and September.
Ooh, I can almost smell and taste the Fougasse, mmmmm.

WOW Dhanggit! You really have a knack with that camera of yours - your photography is amazing! and your blog is coming along beautifully too. I love your little mouse, it's too cute!
Have a wonderful and safe Christmas, Dhanggit!

Sounds delicious I love Fougasse, and beauty pictures, you ... how you make this mouse????? Gloria xxxxxxx

What gorgeous pictures! The recipes look wonderful too.

The bread looks really good. I like the rosemary, bacon and black olive combo.

What a cutie mouse...if only I could use this mouse to surf the internet..LOL!

A lovely brunch...if someone were to prepare such a nice brunch for me. Ok, I know I know...I can just keep on dreaming.

I swear you have the most beautiful stunning photographs! I want that orange/chocolate bar so bad I can almost taste it.

oh my word!! are your blogger friends invited? :D

I like your boldness. I appreciate that you don't care if people don't like what you make. Chicken livers aren't the most appealing item for people, but you really pulled it off! I love the combination of radicchio, and figs.

Your chicken liver and fig bruschetta had me swallowing big time! And Christmas in Provence, with a fougasse and refreshng salad...how lucky can you be! So, what is on your christmas menu, or is it still coming in a next post? Your cute mouse will be most welcome in my kitchen...
ronell

dhanggit, i'm usually not a big fan of chicken livers but your bruschetta looks so appetising! and so does the fougasse. It looks easy enough that I might just try it for our christmas :)

Anita, yes i think it will be good too with some onions or maybe leeks...?

Happycook, yup 50 ppl, i dont know how we will manage that :-D

redacted recipes, me too, its cute isnt it?

bigboysoven, hehehe your cakes too are lovely!!

little corner of mine, if only mouse are really pink..

woknspoon, yup its gonna be a big gathering its actually the first time

daphne, thanks for dropping by

emdy, i love chinese food too!! i'll be cooking some tonight

maybahay, oh dear take extra care and for your little ones too

oggi, he he the truth from the neighbors garden

oh for the love of food, oh that so sweet, merry christmas too, kisses

gloria, i will show you its easy!!

kevin, i love the blending too of rosemary with this bread

lunchbuckets, thanks dear that sweet

bee, next time you are invited!!

illingc, oh im glad to hear that thanks