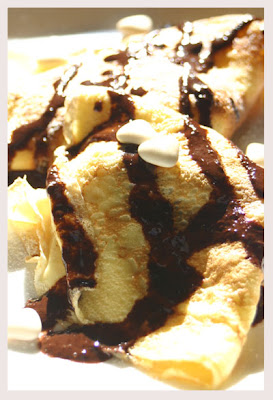 (This is based on a true story. Characters and names where changed to protect the shy blogger)
Before the beginning

It was during the late summer of 1994 when Juliet and her classmates were invited (punished) by their university professor at his place to help correct some school papers piled-up in his desk. His place was located in the suburb outside Manila, a lovely place with lots of tall fruit trees. They were all captivated by a giant mango tree heavy laden with fruits and everybody decided to gather instead. It was at this moment that Juliet saw an old man seated close to the tree. He took the hand of Juliet and started reading her palm. And these were his words: "you will need to travel a thousand miles to meet your prince charming." Of course, everybody burst with laughter. 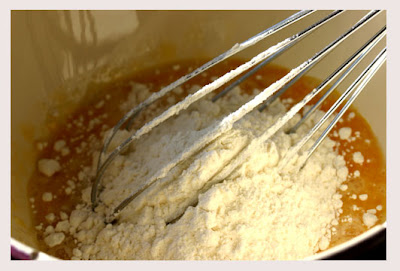 Mix two eggs, with 200 g of flour, half a liter of milk, a liitle bit of salt, 1tbsp of sugar and 20 g of melted butter. Fry them on a non stck pan.
The Beginning

Many years have passed since that summer. Juliet have had quite some relationships in the past but decided this time to focus on her career instead after the last tumultous relationship she had two years ago. When Juliet discovered she was awarded a scholarship grant to Osaka, it was a mixed emotion. She was excited but was scared at the same time for it it was her first time to go really far from her family. When she received her plane ticket to travel it was also during the summer. 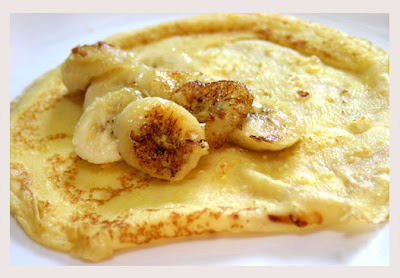 In a pan caramelise some bananas with butter and brown sugar. Fold in this mixture inside each crepe.
The Encounter
There were so many foreign students gathered at the hall. For fear of uttering words in Japanese, Juliet stick only with some acquintances she made earlier. From among the crowd her attention was caught by nice looking backpack in red and blue color. Looks like a giant sneakers with a magnificent shoelace, she thought. It was Romeo's. But their first real encounter was not really there. It was when all the french students invited Juliet and her german friend to stroll around the city in bike. Juliet panicked, she doesn't know how to bike for his strict father never allowed her to learn when she was a kid. But Romeo like a galant soldier didn't think twice to offer her a lift. And that was the real beginning of their friendship. 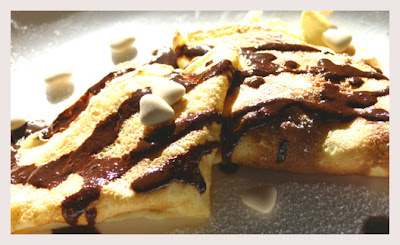 Cover it with melted dark chocolate mixed with some creme fraiche.
The Day She Said I Do
Romeo & Juliet despite their racial differences (he is white, she is brown) have plenty of things in common that binds their relationship: that is their love and passion for travelling & Japan. Their love for each other have survived long distance and cultural differences crisis. Juliet never imagined that summer night promenade with Romeo in Odaiba will be the day she said "I do". After strolling for a while, he invited her to sit on the beach sand. Romeo took her hand and murmured these lovely words.."veux-tu m'epouser [1] ?".. And Juliet replied; "huh?? what?? I don't understand." Luckily though she noticed the diamond ring he was holding and she replied, "oo, payag ako [2]." He didn't understand her reply but they kissed each other.
[1] Will you marry me (in french)
[2] Yes I do (in Tagalog)

And that is the making of our Banana Crepe with Chocolate Sauce "story". I guess I don't need to explain why.
Technorati Profile

Awww, that's a sweet story. How did you two communicate? Which language? And is that still the same language you speak now?

actually we used to communicate in english but he wanted to propose in french he told me.. we communicate only in french right now..

Oh! this is simple and lovely, something I wanted for sometime. Thank you!

Wow that is what i call a love story.
Pancakes looks delicious.

crepe avec banana et chocolat think i know why you choose this recipe that reflects this story...

now now i miss my favourite creperie in Antibes....
hay its love..... i prob write mine kahit on the way na sa divorce court papers namin.. its something i also treasured even things did not turn out to be.

Oh my goodness! I don't know what is sweeter, the story or the recipe. I ate this up! :-)

Thank you for visiting cakespy and your kind comments about the artwork!

I love crepes. have been making them a lot for dessert but too lazy to take photos. Your banana version is on my to-try list!

I love the story. I want to read more!

Hi Dhanggit,
I'm looking forward to seeing how you handle the DB challenge. Although we're both new to the group, it looks like you have a serious leg up on me!
Oh, and the crepes look amazing too!
-- Jane

Dhanggit, I love that exact crepe! But with Nutella instead of choc :) Nice story!

I'm with Manggy. I love Nutella! The crepes look so delicious. I like how the bananas are nice and caramelized.

big boys oven, oh thanks for dropping by again :-)

happycook, now you know my story

cakespy, i think the crepe is sweeter LOL

K&S, maybe you should tell me yours too..

Cynthia, maybe i can do a part two of this..the wedding and the baby..well we will see

Kevin, yup i was thinking of flambeing it up with a rhum but i find it would be too much

Manggy and Emiline, the truth i only eat my crepe with Nutella nothing else..heheh but for the proposal story i just thought it wont sound romantic if i will talk about spreading the nutella hehehe..but like you guys i agree crepe and nutella the perfect combination :-)

Sidney, i read your interview im sure you have a fairy tale too to tell :-)

Oh! this story is so sweet,like the dessert.

Yeah! Part 2 please! Thank you for sharing this sweet love story with us. I love the way the difference in your languages played a part in the proposal. It beautifully shows how love brings together two people from different worlds..

What a great story! And the crepes look amazing as well.

Lovely story..ad lovely crepes too!!
I am into sugarcrafting...do stop by sometime!!

such a sweet story! and a great looking recipe.

not sure what happened to the comment i posted earlier! anyhow...
lovely story. kilig:-)
the crepes look perfect.

Really, lovely history!!!!! nice recipe!! and how Cyntia I want to know more, I want to know ROMEO and the baby yeah!!!!I love love'story, make me feel nice and better!!!!xxxxxxxxx really my dear you are so sweet! Gloria

Hi there, Dhanggit, thanks for visiting my blog, I meant to come by to say hello earlier but was busy with a Christmas musical production.
Crepes are my favourite breakfast/ tea time food - yours look AMAZING! I loved reading your story too ;o)

Sylvia, thanks but im sure you have a sweet story to share too..

Ruy, its true that the language difference was really cute when he proposed...but the truth right now when im angry at him i only speak in tagalog, that way he doesnt understand..Ha hahaha

Sugarcraftindia, thanks for dropping by i will surely visit your blog :-)

Marvin, you how did you proposed?? he hehe it would be nice to hear it from a guy right...?

Maybahay, me too sometimes i have problem posting.;anyways you need to tell me yours too :-)

Gloria, thanks but im sure your story is "mucho mas dulce" :-)

fortheloveof food, i hope you will blog about this musical show..i would really want to see :-)

This is my first time visiting your blog and you made me cry! This is the sweetest, most romantic, delicious, creative, and wonderful post! Thank you for dropping by my blog too! ; )

Dhaggit, proposal and crepes, so lovely and romantic.:)

If you don't mind I tagged you for a meme, the details on my post today. Don't feel obliged to join but I know you will have a lot of fun with it.:)

Emdy, thanks, how about you? Im sure yours was romantic too :-)

i love that you shared a sweet recipe to go with your sweet proposal story. :) a crepe only works if there's a right marriage of ingredients - and yours is perfect. :)

This dessert is as sweet as your proposal! Thank you so much for sharing it. :)

The round-up to the carnival is UP!

Hope you can drop by and check out the other sweet proposals too.