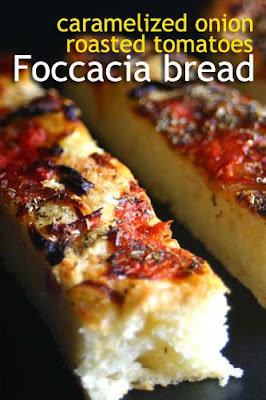 During my foreign student’s life in I still remember well one of the incident that shocked the entire class when one of our Japanese professor confessed something in front of the class. He said that he would never wish to live a longer life. It definitely shocked us because it is contrary to the norm were people would do anything to search for this elixir that will give us the eternal youth. But eventually, of course we understood what he meant. You see his already on his 60’s and apparently he is the youngest in their siblings and everyone else is still alive including his parents and grandparents. (Don’t ask me how old they were? :-)

Japanese indeed surpassed almost any human being when it comes to life’s longevity. Imagine, in the average Japanese ages between 50-60 years old a truly aging society. I am not an expert but I do believe that food plays an important role in prolonging one’s life or cutting it short. But then again science has contributed a lot in making our life easier and longer to live. I know that science has its own evils too but we cannot eliminate the fact on how science saved lives a million times.

One fascinating aspect of it is the organ transplant: from heart to skin grafting we have come to perfection this technology that dates back before Christ. In some big hospitals in a lot of developed nations operating organ transplant comes to a banality that operation is just simple a routine. The great problem that’s confronting organ transplant is the lack of organ donors. The worst story of this is that desperation has given way to international traffic of organs from poor countries selling their precious organs for for few hundred dollars. I witnessed how in , were each member of the family were forced to sell their kidney due to poverty. And this is just but one example.

This delicious and definitely a very healthy recipe of Foccacia bread is my entry to Equal Opportunity Kitchen's Tried, Tested True Take 2 blogging event. That first one was so succesful that they are doing it the second time around. There are prizes at stake and you have until the 21st to send in your entries. This event also aims to rasie awareness on the importance of organ donation. 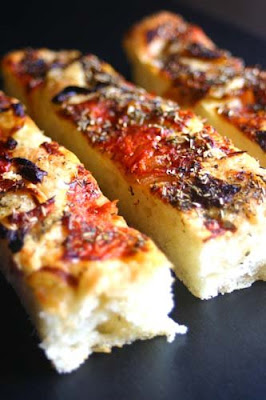 For the bread: of flour (type 45 all purpose)
20cl of water
of salt
4 tablespoons of olive oil
of dry yeast

Place the tomatoes in a baking dish, shower with a little bit of olive oil (about 2 tablespoons) and herbes de provence and roast in the oven at 200° Celsius for about 20-25 minutes. This will depend on your oven, tomatoes needs to be beautifully roasted and that skin is easy to remove, the tomatoes are done. Once it’s cooled off remove the skin and seeds. Chop the roasted tomato, set aside. Heat a pan and place olive oil and onion. Cook for about ten minutes over low fire or until onions are soft and golden, set aside. For the foccacia bread, put the flour on your working table and make a well in the middle and pour ¼ of the water that you have (you will have to control it depending on the consistency of your dough later). Dissolve your yeast in a tablespoon of water and add it in the middle of the well. Add the salt, as much as possible avoid direct contact with the yeast. Start handling your dough, add more water if needed. Knead the dough for about five to ten minutes or until the dough becomes elastic and does not stick to your hands anymore. Add about one tablespoon of herbes de directly to your dough. I love to do this because the flavor of the different herbes gets even better when cooked inside the bread. Over a parchment paper, put directly the dough. Make a square shape depending on the size of your baking dish. Cover it with a towel and let the dough rise for minimum of an hour. Preheat the oven at 200° Celsius. Brush the surface with olive oil and put your roasted tomatoes and caramelized onion on the top. Sprinkle more herbes de . Bake for about 30 minutes. It will be ready when the top becomes golden brown. Let it cool and cut the edges to have a perfect square. You can cut it the size and shape you want eventually. You can serve it perfectly accompanied by arugula salad or a simple carrot soup. 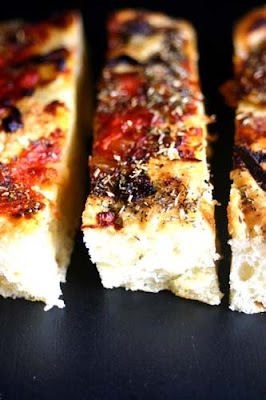 mmm this looks like the kind of foccacia we had at our favorite restaurant in Hawaii :)

Looks DELICIOUC.
In Indian too they sell organs. Once i saw it tv programme a mom seeling one of her organs so she could pay some debts and still she was cheated by the ppl...

Great looking Foccacia..and the pictures are delicious too!
Funny about me wearing a bow...For his 40th bday in Oct we went to Fantasy Fest in Key West(its crazy look it up online) I actually got body painted in the fashion of a present..a Big Bow was painted across my Boobs! He loved it and sooo did everyone else :)Ill have to send you a pic

Ahhh, a wonderful and colourful focaccia, with herbs de provence too!

I would love these with a bowl of soup.

So beautiful! Your focaccia is just perfect-looking, and I adore the flavorings.

What a fabulous recipe and a great submission. Thank you very much. Thank you also for bringing out the unethical organ trade that is causing so many issues internationally. The harvesting of organs for money is just wrong on so many levels but don't even get me started on that.

Leslie, oh my dear beauty I cant wait to see that photo :-)

Peter, I paired mine too with soup last night

Ann, thanks, i love so much tomatoes and onion together

Giz, the pleasure is mine too would love so much to participate on event raising awareness on such worthy cause

Beautiful bread, Dhanggit, it looks so soft and light! I love the flavors too.

Because I'm a dumbass, my drivers license says I'm not an organ donor. I guess I will have to tell my family that I am...

Lovely, Dhanggit. Lovely.
I think I just may have to check out this competition for an amazing cause.

The foccacia is lovely too.

your look soft and moist Foccacia Bread!!So far I only try to make pizza:)

Thanks for the focaccia recipe. It looks delicious. I'll try making this but have to cut down on the tomatos and oignons. Gives me heartburn.
I would enjoy, though, focaccia with a few sprigs of rosemary, then making it into panini with a thin sliver of prosciutto di parma, a slice of mozzarella, a few basil leaves a dash of olive oil! Yum!

Yummy! I really need to try making some Foccacia!

Simply gorgeous Dhanggit. After the DB challenge I have become a sucker for homemade focaccia. Yours looks superb!

Mmmmm I adore foccacia. Never made bread before though, I'm a little intimidated with the yeast, heh. But I'll bookmark this for one day when I'm feeling adventurous :)

I think one of my favorite flavors are roasted tomatoes and caramelized onions. This looks so amazing, would make a great appetizer.

This bread looks wonderful, and I will be trying it.

Canada is on the verge of passing a law for organ-donation that stipulates that unless you make it clear you don't want your organs taken at death, then you automatically are a donor. This will likely be done on the back of the driver's license. If it isn't completed on the back to say "no", then you are a donor.