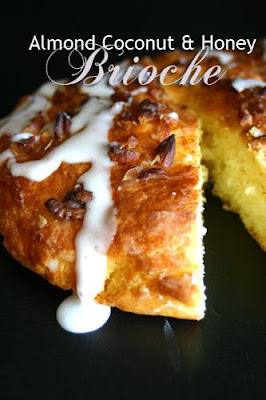 How good are in your french culture?

What day can we hear Serge Gainsbourg, David Gueta, or even Lorie's (the equivalent of Britney Spears in France :-) music played side by side in the street of France?

Every 21st of June, France celebrates its Fete de la Musique (Festival of Music) the day created by Jack Lang a socialist depute where any musician from nobody to wannabes, famous or international artist can play their music for free. In our city alone, imagine this:

On the main thoroughfare, bars have organized some acoustic and jazz music while few blocks away was a stage where they were performing country and cowboy music. And a little down was a group of young boy band serenading their own compositions hoping desperately to be discovered by a talent scout. In the main parking lot fronting the Mayor’s Office was another type of music, I didn’t had enough time to decipher what were they playing my ears were too tired and have no where to hide. And the best part of this was the small park fronting our house that they transformed into a techno party with house and techno music vibrating incessantly. And when the ambiance is like this it definitely puts me in the mood to make some brioche. If you don't like this Ensaimada, blame it on the techno music. :-)

Here's is my entry on Kalyn's Weekend Herb Blogging that she is hosting this week, a blogging event that she also created. 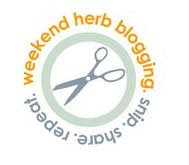 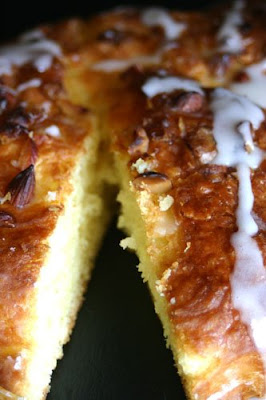 of icing sugar
1 tablespoon of milk

Start by dissolving the yeast with the milk. Put one cup of flour in a bowl and mixed the dissolved yeast. Add the salt, sugar and one egg. Once the mixture becomes homogenous put one cup of flour. Cover and let the yeast ferment. Normally after an hour you will notice that the flour covering the mixture starts to crack, this means that the yeast have started to work. Add another one cup of flour (which means you still have the remaining half a cup) , the honey and your remaining eggs. Mix them using your machine (I used my bread machine to mix and knead them). Continue mixing them for about five minutes, then add your butter that’s been cut in cubes and continue mixing for another five minutes. Add this point you will add your flour to check the consistency of your dough. It is very sticky and unmanageable at this point. Put some oil on a bowl and pour your dough in it. Cover it and put it in the fridge for minimum of seven hours. After this process you can be able to shape and handle your dough. As if you are handly a puff pastry you will need to make several folds on your dough. Add your coconut and half of your chopped almonds on the dough. Shape a ball form and flatten it a little bit. Grease your pan and put your dough brioche. Brush it with egg wash to give it a golden color. Top it with the remaining almonds. Bake it for twenty to twenty five minutes at 200° Celsius. Before mix one tablespoon of milk with of icing sugar. Pour this icing liquid on your brioche. 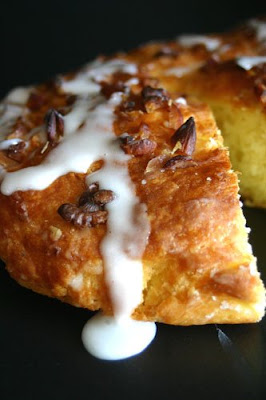 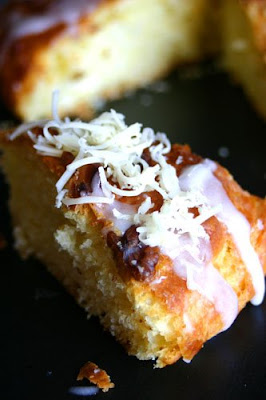 Care for a bite?

You could also try my other brioche recipes:

Ooh, you've certainly got this Filipino's attention with the title :) I actually was curious how closely our ensaimada related with brioche-- it seems ensaimada derives its richness not only from butter but also from egg yolks. I think it was 8 or 12 egg yolks. Yikes. I'll try to make it when I have the time :)

Even if I'm not a fan of coconut, I'd totally bite into those, Dhanggit!

i think the original calls for twelve egg yolks, you are right..i even decreased the butter..you know im a bit concern with our calories hehehehe :-)

You have one of the most exotic range of brioche :) ...yumz...I enjoy brioche cos' it usually have a savory hint.

I think we have the same thing in Hawaii, it is spelt a little differently (ensemada). But I love this, the version we have in Hawaii has a butter sugar topping that is so addicting!

This looks delicious!! Looks difficult to make too :)

Ang sarap naman nito! I will try this one din!

My WS photos are now posted in these blogs:

Please drop by if you have the time. Thanks!

I've yet to have breakfast and these remind me of danishes, but better!

Yumm I have bookmarked these to make them and will do like you said in my bread machine.
Will have to wait though making them in jully we are going to India for two months.
So will make them in septemeber.

The Festival of Music sounds like lots of fun! Very impressed with your brioche (I am such a failure at baking!)

what a great way to start my day!even though i still have a stomach ache from all the ice cream!

I would absolutely care for a bite. Delicious and gorgeous!

You had me as soon as you mentioned honey. There is nothing in the world more comforting - I think - than bread and honey.

The festival sounds like fun. It's great to imagine each individual talent, joining in with others to share what they love to do.

oh Lord! now i'm really HUNGRY!!! that looks soooo good!!!mine's up too at this link!

Dhanggit!!! Really looks wonderful and yummy!!!! I love it!!!! Gloria

WOW! This looks GOOD! I want to try soon. Btw, thanks for visiting my place. I am so glad to know your site.

me..not so good in the French department! Could even read the name of the bread!!! Hey, even if I cant pronounce it, I sure wouldnt mind eating it!!!

Hello! Thank you for stopping by and leaving a lovely comment. Just came to check out your blog. Yum yum! So many delicious recipes. This one is no exception. Looks tempting!

I just subscribed to your blog to read more from you.

The brioche looks divine! I can picture a nice cup of coffee with a big hunk of brioche! The chocolate Saucisson from your previous posts has me drooling. I am going to look for Pim cookies because I really have to make this.

I’m from Ate Media, a media company specializing in F&B, travel and lifestyle. I have some exciting information that might interest you.

I couldn’t find any email address on your site. Perhaps you could reply me at cheryl@atemedia.com and I can follow up with you via email?

Thanks and have a great day!

Looks fabtastic, Will have to try these, waiting for my new wall oven, have kept it bookmarked. Will try these soon. BTW, I am hosting a ONE DISH MEAL EVENT, I would love for you to participate. The details are in my site. Looking forward to an entry from you.

Delicious - I'd care for more than a bite - a huge piece for me please!

That looks good! I like the almond and coconut combo.

You recalled for me the Fete de la Musique I attended in Tours many years ago. Great one, and were able to share Filipino music there.

And of course I love ensaymada!

Tres riche! I love ensaimada, and when I was pregnant I had a very bad hankering for it. Unfortunately, I was living abroad so Pinoy style ensaimada was not within reach. I just 'settled' for brioche, which I slathered with lots of butter then sprinkled with sugar and grated sharp cheddar cheese. It was not the same, but for a pregnant woman on a mission, it was the best!

This recipe looks good. It reminds me of the German coffee cakes with the nuts and honey. That glaze looks so mouthwatering! I bet this would be good with coffee at breakfast.

There's something wrong with my reader that I'm stuck at only your May posts!

Oh my goodness, there's like a month of goodness that I've missed!

Especially this. This is going to be bookmarked.

MMmmmm. ensaimada. I haven't had one in a decade.
To think that we used to always have this on hand in the phils...