Miniflute Bread: Men do not live by bread alone Part 1 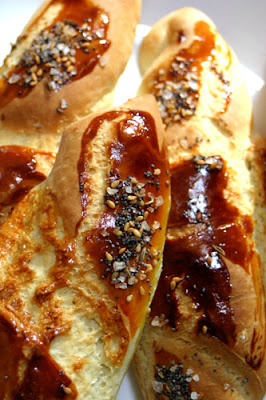 If rice is to Asian, bread is to French.

Before being married to my french hubby, I have always believed this to be true. I remember that the first thing that strucked me visiting France for the first time was seeing them precipitating in boulangeries to buy their baguette for the day. Some would come out with one, others with two, or interestingly some were already consuming what they bought when they just been out of the boulangerie. You wouldn't imagine too how easy it is to find a boulangerie, for you will surely see on in every block.

French people love affair with bread dates back in history when majority of France were peasants and that eating soup and bread was the only means of survival. To note in their history was an interesting anecdote when people were rallying against scarcity of bread to eat against the monarchy and Marie Antoinette's naive reply was, "why they don't just eat cake.." This relationship is also something they take very seriously. French laws are very much strict in preserving their bread and the artisans behind them. Baguette for example should only contain water, flour, yeast, and common salt The addition of any other ingredient to the basic recipe requires the baker to use a different name for the final product.

This weekend, I had a wonderful experience to have a chat with a grandmother living in Alps making her own home-made bread. When we went back home, I didn't wasted time in baking this magnificent and equally delicious bread adopted from Sandra Avital's Mini-flute bread. In the original recipe there was water included but I took it off I was too scared my dough will be too sticky. I was quite satisfied with my version despite it's the first time I baked a bread. I advise you go and check her site for it's a very good source for all those wonderful baking goodies. Well explained and wonderful photos. :-)

(I'm sending over this photo too for Click's february theme: flour) 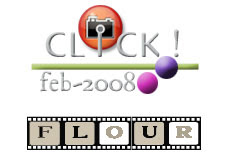 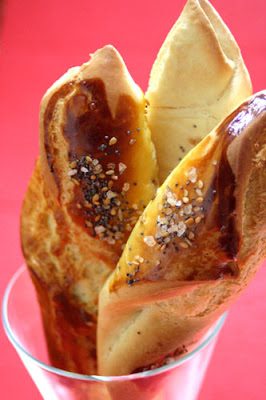 In a bowl, mix the flour with the dry yeast and salt. Add the warm milk and mix .Transfer immediately in your working table lightly floured. Knead the dough for about 15 minutes until it becomes elastic and non sticky (you can always add a little bit of flour to facilitate this task). Let this dough rest for about ten minutes covered by a towel to avoid drying. Continue again kneading the dough until it becomes really non sticky. Form a round shape and leave the dough in a bowl lightly oiled and cover. Let the dough rise for 1 hr. Cut about 12 to 14 triangles of about .5cm thick. Roll them from the largest side towards the smallest side. Brush with egg yolk and powder with rock salt and seeds. Cook for about 15 minutes at 200°celsius. Put a ramekin with water inside the oven while baking to add humidity. 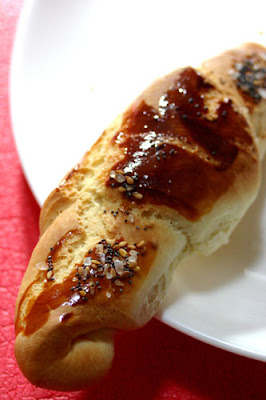 can you just imagine my husband eating rice and adobo...and for the final french touch cleans his plate with a slice of the famous baguette...yummy...PROST

Beautiful! I can't wait to try this recipe - it sounds and looks delicious! Bread is one of the reasons why I love France so much (amongst other, of course!). I'll be in Paris in a few days - boulangeries and patisseries are top of my list!

Beautiful Beautiful.
This is so true about bread. When I visited France, we had bread at every meal! At the time, it seemed so wrong.
Now, it seems so right.
I could not live without it.

I didn't like bread at all ! I am a rice person itself (I cannot live w/out it) but living in France made me change my taste buds ! Now, I can passed on the rice :D ! This bread looks inviting I love these sesame and pavot seeds. You always amaze me with you talent(s) ;)!

Your bread looks delicious...I have to admit, I can't pass by the boulangerie, I simply have to buy just something! It is an addiction! But then a delicious one!
ronell
* I have passed on a meme to you...to reveal 5 things about yourself and then choose 5 other people to do it. If you have already done it, I apologizeYou can then just skip it or link to a previous post.
R

Great blog with beautiful pictures. Bread is a total weakness of mine. Something I could not live without!
I look forward to continue reading your posts.

Beautiful bread! I will add this to my growing list of breads and buns recipes. I am currently building a website for my photos of breads and breads alone! Can you tell I'm a bread enthusiast?:D

Dhanggit, thank you so much for this recipe, MWAH!.

Those bread look so good makes me want to fly to France right now and get some.
Such beautiful shots. Your food shots are always so well done.

I've blogroll you on my writing site (just write) as I couldn't do that on my photoblog. Have a wonderful week.

We can't live by bread alone, though with these images I'd be tempted to try!

You have nice pictures. I'll be visiting your blog even if it's not yet time for our weekend snapshots. I'm a foodie too. Love taking pictures but not as sharp as the ones here.

wow! ang sarap!!! can i add ur blog? so that i can visit some more and get a taste of your delectable foods!

Wow..beautiful is the word!!! Will definately try this..thanks so much!

I think I could almost live on bread alone... I love the smell as it comes out of the oven.

This is beautiful bread!! I really could just eat this bread on its own!! Nothing compares to freshly baked bread and its aroma in the air.

I remember many years ago eating fresh chunks of baguette with butter and cheese when I went on a school trip to France and what delights that was!

Not only is the bread beautiful it looks and sounds delicious! Thanks for sharing the recipe!

Wow! The bread looks amazing - beautiful enough to perhaps inspire me to try it. Intimidating but I bet the results are worth it. Bread would definitely be my choice for a "dying food wish." GOOD bread, that is.

Beautiful bread! Is it a family recipe? Nice pictures!

Gosh! Your blog is so beautiful. I like the pix of the kitchen with the window looking out to the garden very much. Is this your kitchen?

Wow! this is lovely! I will defintely follow your series of bread baking as I want to try to make some! TQ

Thanks for the pavot seed introduction. This is new to us and everything looks so yummy. Bet it tasted soooooo good, hot out of the oven!

I have to confess I miss good bread here... although I have to say that it is not impossible to find good bread here in Manila. I think that Filipinos start to appreciate bread.

What a wonderful seemingly easy bread recipe! I am making this right away! Great job. Nothing can compare to the smell of fresh baked bread.