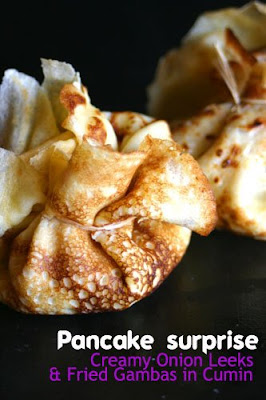 What type of pancake are you ?

I was raised to love food. Despite the fact that the number one cause of mortality in our family I suppose is food related (diabetes, hypertension, bad cholesterol, etc) we are all still passionately in love with food. And it is especially evident during breakfast where we normally feast on the last night’s left-over. When I was a kid during weekdays it was fried rice with fried salted fish all year long. Without a fail. And that is the reason why my sisters and I have learned to appreciate and savour pancakes sweetness on the weekends, we buy from the neighbor. Consider it our refuge from weekdays of salinity.

When I met my husband, he told me his specialty was crepe. (Huh?) He told me again, pancakes. (Ahhh, ok). So when he cooked for me, it was an immediate electric shock for me. First he added some beer on the mixture, (What?) then using his non-stick Teflon pan he started throwing the pancake up in the air showing all his acrobatic skills. (Wow). He garnished it with champignon, jambon Serrano, cracked egg and some grated gruyere. This is considerable remote from the pancakes I used to enjoy. I was really sceptical about his salty pancake at the beginning. But I was completely smitten from the first to the last bite.

I’ll be sending over this pancake surprise to my dear lovely Susan, the Well Seasoned Cook, for Pancakes on Parade, a delicious homage to pancake event that she is hosting. I hope I am still not late. 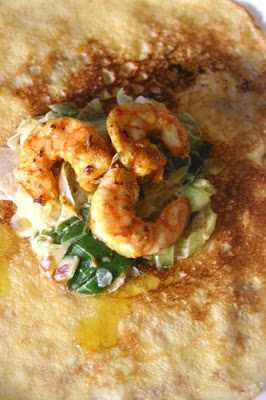 For the pancakes: 125 g of flour a quarter of milk 3 eggs a pinch of salt 50 g of butter 2 tablespoons of beer 1 tablespoon of melted butter for frying

Melt the butter. Beat the eggs as you would make an omellette then pour in the melted butter, beer and milk. Add the salt and the flour. Continue mixing until it becomes homogenous. Fry them in a non stick pan with butter.

Heat the pan. Melt the butter and olive oil together. Put the onion leeks and caramelized them over low fire. Pour the fresh cream once the leeks have wilted and changed a beautiful golden color. Salt and pepper to taste. Set this aside.

In a bowl mix the lemon juice with ginger powder, curry and cumin seeds. Put the gambas and let it marinate for about thirty minutes. Then heat the pan and pour the oil. Fry the gambas for about five minutes.

Assembling:
For every pancake put a layer of creamy onion leeks, gambas and fold it as you would make package. You can tie them using chives, toothpick or some rafia. 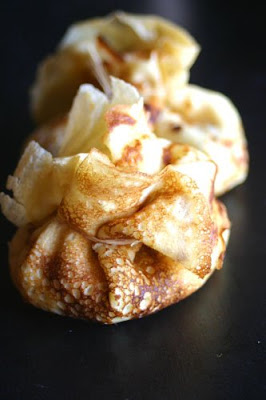 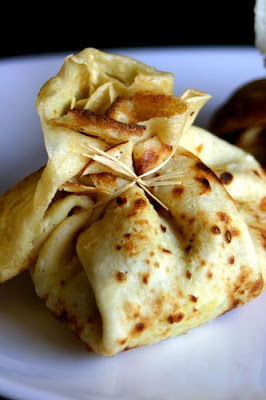 You can also try these recipes:

Yay! I thought I heard somebody say "crêpes" while I was asleep ha ha :). Sometimes I think my tummy has a mind of its own.
I love your savoury filling and the crêpes look great too!

Wow, that looks fantastic! The tied 'sack' reminds me of stories where Cranes/Storks/long necked birds dropped babies in little sacks and surprised people :)

I've seen something like these called bundled purses and there is indeed a little treasure inside!

Dhanggit, no worries. It's not too late. I haven't even done my own recipe for my own event yet. : O

These are bundles of pure culinary joy! Your creativity knocks me out.
Thanks for joining Pancakes on Parade!

Mmmmm, Dhanggit! I'm now imagining how yummy those pancakes must be (and I just had lunch!!) - can't wait to try this out.

A Scientist in the Kitchen said...

Love this one, especially the surprise inside :)

I guess I wont be needing my Aunt Jemima Syrup for these! They look yummy! And yes I am awaiting your email...turn you ringer off!!!!

I do believe we think alike, heheh. I just made savory buckwheat crepes and will add this to my list of fillings.

The pockets are beautiful!:)

How cute! I would love to open this little pancake surprise!

Oh my god, how fabulous are these pancakes? You are one creative woman!

Savoury pancake bombs for breakfast? Yes, that's one reason to wake up!

Thanks for visiting my blog.

What a tasty bundle. These would be a hit at any cocktail party.

These look so elegant! Oh -- and I would fall in love with any guy who could make pancakes and flip them in the air. Sounds like you are very lucky indeed.

How lovely to open the parcel to find the delicious filling inside!

Wow those are too cute and very attractive too, add to the fact its yumyumyum!

Your husband's crepe skills must have definitely impressed you ;-) I didn't like savory crepes when I was younger as well, but I love it all now. I also love anything with prawns (which goes perfectly with leeks), so I love this concoction of yours. Unfortunately, time ran out for me to participate in this event.

I love this cute pockets of goodness! I love the shot of the filling, yum delicious!

wow....i'm speechless. These are just perfect!

I love the combination of flavors you have here, paired with the lovely presentation!

Wow - these look fabulous, I love savoury crepes... and food in parcels ;)

the last photo is so awesome, makes me wanting one! wow!

These are gorgeous, and they sound soooo delicious!

Ooh! Tres elegante! :) Seafood crepes are excellent. I can't believe it's been ages since I've had one!

I'd have to agree, those are cute.
I have crepes stored in the freezer which I made weeks ago and forgot all about, until now. So maybe I'll finally get around to making those little pouches. They look delicious.

This looks SO good!

My only regret was that I didn't eat enough crepes in France. But I guess I can always make them at home, so it's not that big of a deal. Just a novelty thing :D

I love how you wrapped them up into little parcels. Just adorable!

whoa... these look unbelievable. savory crepes are my favorite - even reading the title of this post made me salivate!

Hubby will like to have a taste of this! He's a fan of crepe. The presentation looks wonderful so as the taste, am sure.